The holidays are fast approaching and there is no better way to get in the festive mood, than snuggling down on the couch with your family and watching a feel-good holiday film. As you decorate the tree, bake cookies and hang ornaments, let one of these Netflix movies set in the mood:

This Christmas musical stars big names Forest Whitaker and Phylicia Rashad and features music written by John Legend and Usher among others. The film follows the story of the granddaughter of a toymaker who looks to recover a prized invention which was stolen by his apprentice.

The Knight Before Christmas

With Vanessa Hudgens playing the lead in this romantic Christmas flick, you are guaranteed a good time. When a knight is sent to modern times by a sorceresses, he is befriended by a teacher, Vanessa’s character. Of course, as the knight spends more time with this teacher, he begins to falter on his plans to return home. 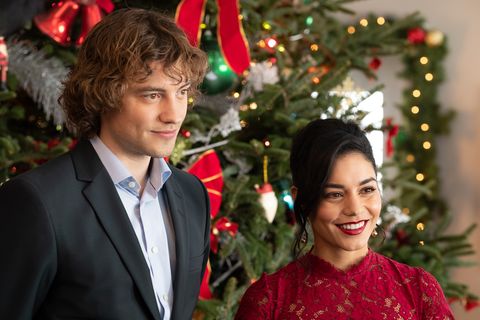 Holiday In The Wild

Spending the holidays in Africa means no snow, but plenty of baby elephants to warm the heart. Kristin Davis plays the character of Kate who sets out on a solo safari to Africa and ends up helping to rescue baby elephants, spending Christmas in a foreign country and finding love at the same time.

This 2020 release stars Emma Roberts and Luke Bracey in a romantic comedy that sees the duo team up to act as one another’s dates for those hated holiday parties. Of course as the pair start to get into the festive spirit, love is also in the air.

Starring Kat Graham and Alexander Ludwig, Operation Christmas Drop was inspired by the US Air Force’s real life gift giving airdrop programme. This film follows the love story between a pilot and congressional aide who has plans to shut down the military program.

This unique sci-fi holiday animated flick offers a different theme for the kids this Christmas. This one of a kind film follows a bunch of aliens who attempt to take over the world by stealing gravity, until one alien, names X, tries to stop them by spreading the holiday spirit.

Vanessa Hudgens returns in yet another Christmas film in the sequel to the Princess switch. The actress plays both the character of the princess and a baker who switch lives, while a third lookalike also makes an appearance.

The 2019 film Holiday Rush, follows the story of a New York City DJ who suddenly loses his job just before Christmas. Having always spoiled his children in the wake of their mother’s passing, the DJ must find new ways to celebrate the holidays with his kids.

This 2019 romance/drama release is based on the popular book, Let it Snow: Three Holiday Romances. The movie, like the book, follows the lives and loves of a bunch of high school students when a snowstorm hits their town.